For most kids who grow up in communities like the projects of Culver City West in Los Angeles, graduating from high school and going to college is an unattainable dream. However, Venice High School’s music teacher, Wendy Sarnoff, has changed this stereotype. 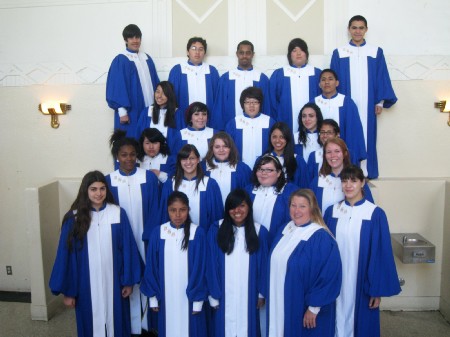 Wendy, who took over and continued the rich legacy of Venice High School’s music program in 2011, has ensured several students full scholarships to summer music programs and college whether the kids majored in music or not. By instilling the values, work ethic and skills required to excel in music, Wendy provides students a chance to excel in life and to pursue a career in a field that they would not have never considered. The impact she has on her students’ lives also sends ripples of hope throughout the community. This is evident because she was nominated for the Grammy Music Educator Award by a parent who doesn’t even have a child in any of Wendy’s classes.

Wendy serves about 150 students and they all participate in an instrumental music class in which they are taught the basics of each instrument used in Marching Band and Orchestra. Once the students have an elementary understanding of each instrument, they are allowed to choose to take guitar or piano. Wendy also teaches the choir, which became the only LA Unified school to make Nationals.

Having the Little Kids Rock program at her school has inspired her students to take control of their learning experience. Her students use the music room during lunch to form bands and work on the curriculum. Wendy likes to call this “Hangout Time.” It is a chance for students to just jam and discover shared musical interests. Wendy uses time in class to build the skills and once the kids feel comfortable with the musical tools they have learned, they get to use their imagination and creativity to make music, something that has helped many of them get into college.

“If I can get students four year scholarships to college where they can get out and push themselves a little harder, I am proud to know that I’m changing these kids lives!” she says.