We’ve all dreamed about being a rock star just like Elvis Presley, Michael Jackson, or Taylor Swift. But in Krista Fanning’s music class at Caddo Middle Magnet School in Shreveport, Louisiana, her kids don’t dream of becoming rock stars… they tap into the rock star that already lives within them!

Every year, students come into her class a little bit scared, not knowing what to expect, but at the end of the year they leave as music makers who’ve learned to listen to and create music, primarily with the guitar. 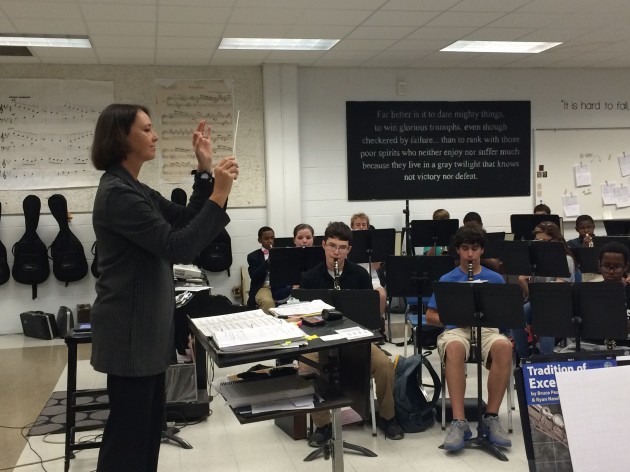 Krista teaches Modern Band and guitar classes throughout the day, and offers a guitar program after school. Sometimes it is a little hard for students to commit to staying after school, so she offers a small “Lunch Time Band” just for them, so that every child has the opportunity to unlock their inner rock star.

Krista sees how she changes her students’ lives. Every day, she witnesses them supporting each other more, and the changes are especially profound at the beginning of the year when they are all a little nervous, which she attributes to the transformative power of music. But what she finds truly astounding is the camaraderie and support that continues to occur outside of her classroom!

For Krista this nomination isn’t for her, but for her students. She says  it is humbling to know that she is being recognized in a profession that isn’t known for public recognition. It’s an excuse for her students to go around and proudly say that their teacher was nominated for such a prestigious award, and she couldn’t be happier.

By the end of each year, her students not only have the musical ability to feel comfortable with an instrument in their hands, but also the confidence to be a rock star, both in and out of school. And at the end of the day, for Krista Fanning, that is what teaching music is all about!