This week, we would like to introduce you to Chris Alberts from Schools Without Walls in Washington D.C. 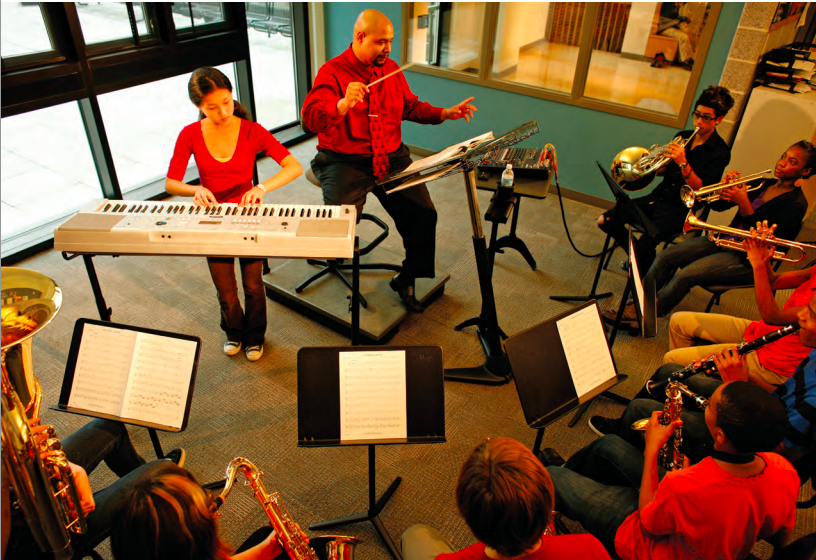 Here’s a scene you don’t see very often: a line of an inner city public school students standing outside of a classroom eagerly waiting for their teacher to let them in and begin class.

It’s no secret that there are students that have no interest in taking a music class or learning how to play an instrument. However, after introducing Little Kids Rock’s methods, curriculum and instruments to his music program, Chris Alberts has been able to reach more kids than ever before, and much more quickly. Now, students who would not have normally joined the music program are choosing to participate. Kids wanting to be a part of an elective class is a rarity these days… a true testament to Chris’s teaching style.

Chris has about 150 students in his program and offers several ensembles from which his students can choose, including: Full Symphonic Orchestra, Modern Band, and Guitar Ensemble, which has about 25 student guitarists.

In fact, he was already teaching in a similar manner, but Little Kids Rock introduced him to a much larger network of teachers across the country who have offered support in various ways, from sharing lesson plans to offering encouraging feedback on videos of his program.

But is he changing his students’ lives?

“Well, I hope so,” he says. “I know what music is for me, and growing up, it stuck with me and it continues to make a daily impact on my life. We are all involved in music every day and we don’t have to be professionals to understand that. By participating in music, kids feel as if they have a sense of purpose and pride.”

Since Chris is always so focused on the impact that he has on his students, he was pleasantly surprised when he received a letter in the mail notifying him that he was nominated for the Grammy Music Educator Award.

“You don’t expect something like that to happen!” he said. “At first, the Grammy Foundation told me to keep it to myself until they were ready to publicize it. When I found out that I made it to the next round, it was definitely really weird to tell people, ‘Hey, I was just nominated for a Grammy Award!’ It’s an honor to just be nominated, as cliche as that sounds. It’s nice to be recognized for the work that I do.”

Whether he wins the award or not, he knows that the work he does is being recognized. All he has to do is look outside of his classroom and see the line of students continue to grow.